Based on the refreshing premise that sibling rivalry is overrated, Marie-Luise and Christoph Dingler’s duo The Twiolins is an emotionally nuanced and energetic project at the peak of today’s progressive classic music scene. The Manheim-based violinists have performed as soloists with numerous orchestras such as the German Radio Philharmonic Orchestra, the Philharmonic Orchestra of Baden-Baden and toured the world as a duo. A live version of their 2021 album Eight Season Evolutions, which has been honored as a silver medal winner in the Global Music Awards, is currently available on MusicTravelerTV.

How do you describe your style?

We are trained as classical musicians and have worked in that milieu since finishing our studies. However, we often play our own style of  “progressive classical music”  whose trademarks are ear-pleasing harmonies, broad melodic lines and eccentric pulsating rhythms, merging classical, avant-garde, minimalist music and pop-art-pop into a new sonic sound universe.

Would you tell us a bit about the Eight Seasons Evolution project?

On our newest album Eight Seasons Evolution, which features works by Antonio Vivaldi and Astor Piazzolla, we seek to discover the new in the old. Antonio Vivaldi’s world-famous cycle of solo concertos is often combined with the lesser-known Four Seasons by Astor Piazzolla, starting with Gidon Kremer and his Eight Seasons. We go a step further by connecting individual movements by Vivaldi with Piazzolla tangos. This new approach unearths fascinating parallels and suspenseful transitions and alternations. We broke with hierarchy in a different sense, as well: out of the orchestral movements of their originals, we have crystallized the musical essence in a way that allows for a little rivalry between “just” two violins. 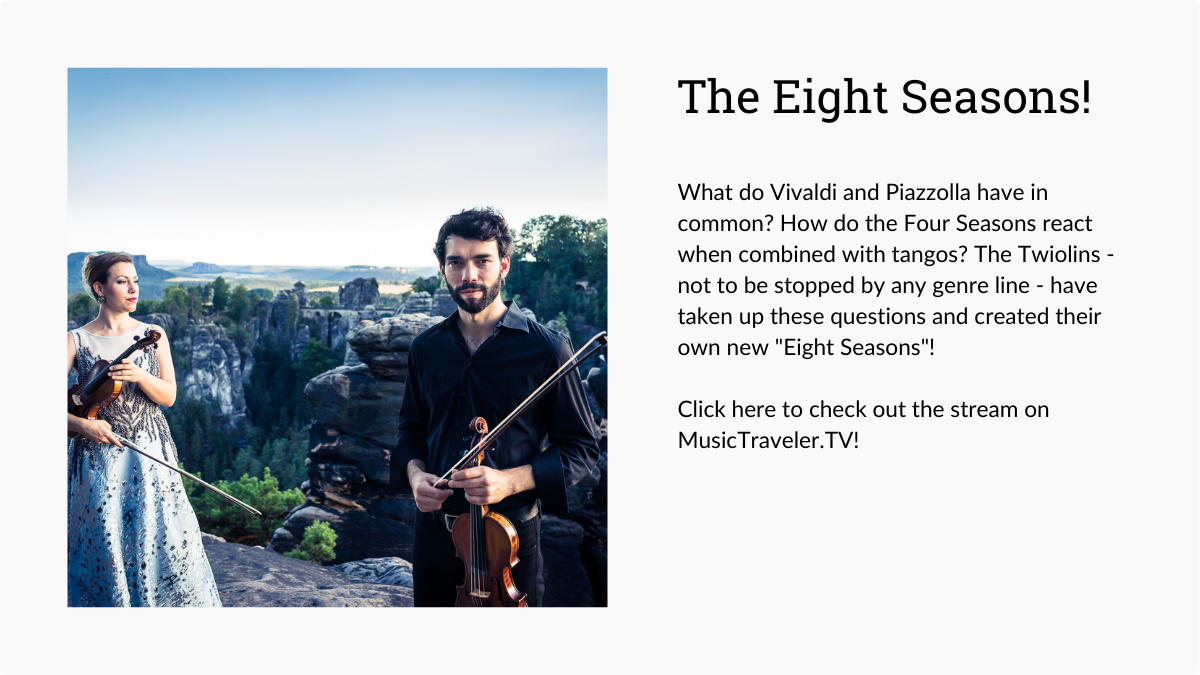 In these times when performances are not taking place, where do you dream most of returning to play when that's possible again?

Actually, we dream most of performing live in any capacity. Our last public performance was in October and I can't remember such a long period of no performing like that ever before. Of course, we've done some live streams, but this is not the same. I hope we can reschedule all the scheduled concerts which were canceled. I was really looking forward to performing at the Mozartfest Würzburg and of course to return to all the places we have been before and which welcomed us warmly.

One of our missions at Music Traveler is connecting artists. Any dream collaboration you’d love to see happen?

We’ve seen that Janine Jansen and Julian Rachlin are performing the Prokoview Sonata on Music Traveler, which has been in our repertoire for a long time. It would be fun to switch partners with this piece.

How has streaming changed your approach to music?

We like that streaming has helped us stay in touch with our fans.

Of course, streaming involves a lot of work when you do it by yourself. The technical stuff has to be arranged properly and has to work well, you have to do a lot of advertising if you want to get people in front of a screen. However, we really miss the contact with the audience.

There's nothing that can replace standing on stage and hearing your audience laugh or applaud, and we miss standing at the CD table and talk to the audience after the concert.