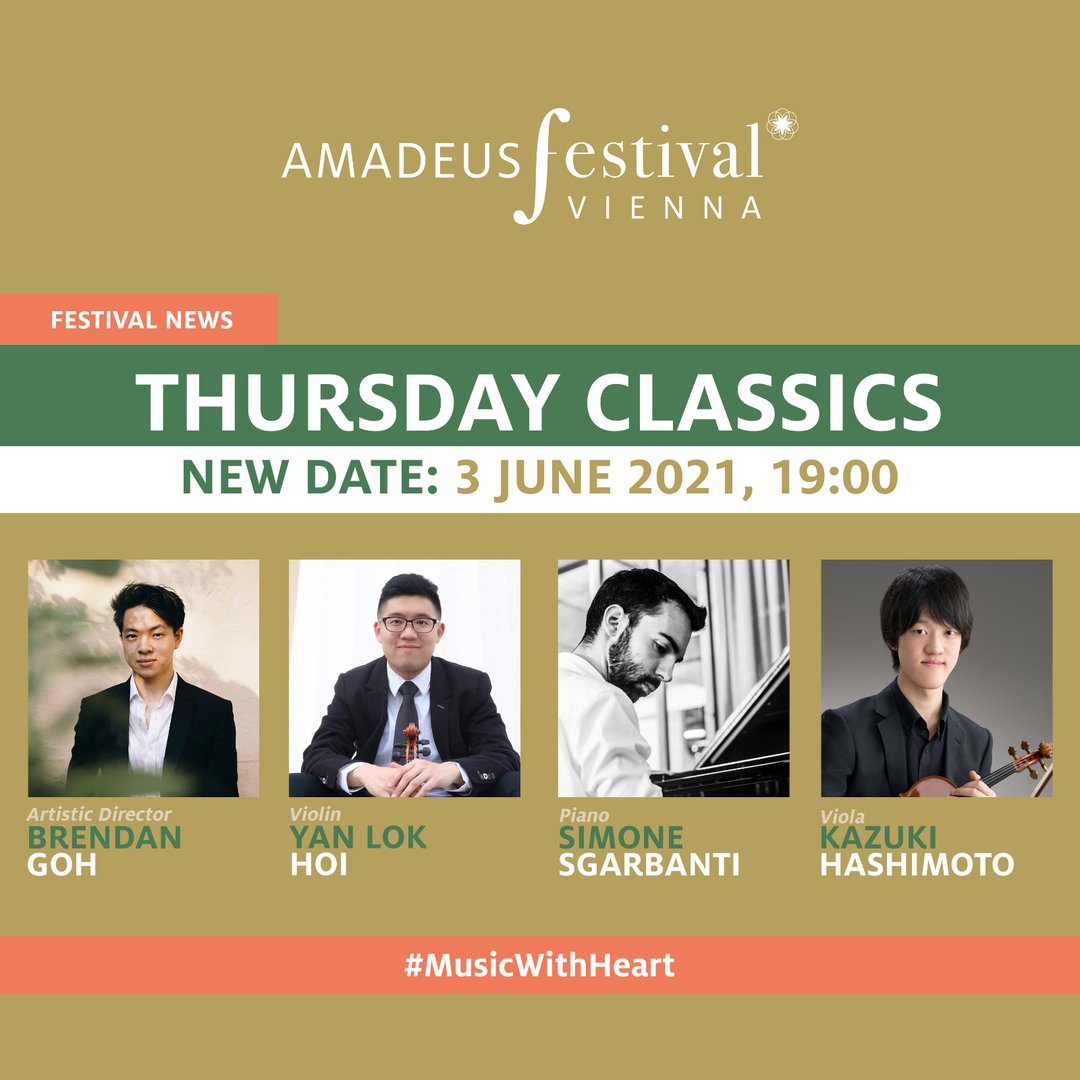 “Thursday Classics” is a concert series under the direction of cellist Brendan Goh. It is an exciting platform that not only showcases up-and-coming young artists, but also offers opportunities to work with established artists. A soundscape laboratory of sort, it allows new ideas to be presented to an audience ready for fresh energy. “Thursday Classics” is part of the ‘young artists’ focus of the AMADEUS Festival Vienna.

BRENDAN GOH
Brendan Goh was born in Singapore in 1999 and began his cello studies with Liwei Qin, head of the cello department of the Yong Siew Toh Conservatory. He moved to Vienna, Austria, in 2013 and continued his education with Franz and Matthias Bartolomey at the Amadeus International School. In 2015 he entered the class of Lilia Schulz-Bayrova at the Music and Arts University of the City of Vienna. Brendan took masterclasses with Valter Dešpalj, Reinhard Latzko, Arto Noras, Frans Helmerson und Ivan Monighetti. In 2015 he was accepted as student at the renown Kronberg Academy for a masterclass with Miklós Perényi. He also received additional support from Heinrich Schiff and Steven Isserlis.

In 2011 Brendan made his solo debut with the Camerata Singapore playing the cello concerto in C Major by Joseph Haydn. This was followed by appearances in Singapore, Korea, Japan, Liechtenstein, Germany and Austria. In 2014 his first CD “Moments of Youth” with works by Bach, Schumann, Piazzolla and Paganini was released by the German label “ARS Production”.

2016 he made his debut in the chamber music hall of the Berlin Philharmonic as a soloist of the Camerata Berlin. As winner of the New York International Artists Competition, he performed in the prestigious Carnegie Hall in 2017. Since 2019, Brendan is artistic director of the concert series "Thursday Classics at AMADEUS" and the "Amadeus Festival Vienna" (Young Artists Programme) in Vienna.

Brendan plays on the cello “The Strad” (1844) of Jean-Baptiste Vuillaume.